If you’re a reader and a Cyberpunk fan, then you’re going to love some of these novels outlined in this article. This article will list some of the best Cyberpunk novels that are available to you. 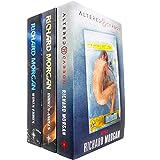 1. Down and Out in the Magic Kingdom – Cory Doctorow

DOWN AND OUT IN THE MAGIC KINGDOM
£7.38
Buy on Amazon UK

Down and Out in the Magic Kingdom is a science fiction book that was written by Cory Doctorow in 2003.

The story is told by narrator, Julius, who is over a century old and his childhood dream was to live at Disney world (otherwise known as ‘the magic kingdom’). The book takes place in the 22nd century, mostly in Disney world, where Julius is living out his childhood dream by living there. Disney world is run by rival adhocracies who are all competing to get the whuffie that the guests offer. Julius’ best friend, Dan, used to be one of the most popular people in the country based on the whuffie system. However, he has now lost all of his whuffie and loses his will to live, hoping that if he dies he will not be rejuvenated. Julius is then murdered (dead for a fourth time, yes fourth) and rejuvenated, by the time he wakes up, a rival has taken over the Hall of the Presidents and edited it so that guests are given the illusion of being the presidents themselves. To Julius, his girlfriend Lil, and his best friend Dan, this is an abomination and threatens what Disney world is all about. There is a twist when Julius suspects that those who murdered him are the new group in power, hoping that Julius’ death would be a distraction in order for them to gain control.

The novel is certainly different, adding elements of our modern world with some futuristic technology and science, such as the cure to death. This book makes for an interesting read.

Altered Carbon was written by Richard K. Morgan in 2002. It is a science fiction/mystery novel that because of popularity and an incredible story, has also been given its own series on Netflix.

The story takes place in a world where your consciousness can be transferred to different bodies, meaning that you cannot die. It follows Takeshi Kovacs who is a former soldier, and is now a private investigator. He must investigate a rich man’s death, the rich man hires him himself in order to find out who killed him and why.

Snow Crash was released in 1992 by Neal Stephenson and it is a science fiction novel that also covers many other topics as most Neal Stephenson’s novels do. This includes topics such as history, religion, politics, and philosophy.

This novel looks at two worlds, almost like in a computer game, in one world Hiro Protagonist is a hacker and a pizza delivery driver, working for the mafia. In the other world, known as the Metaverse, Hiro is a warrior prince. There is a computer virus that seems to be targeting hackers, Hiro tries to hunt down the virus by entering into its world in order to take out the virtual villain.

The Diamond Age is another novel written by Neal Stephenson and published in 1995. It is a science fiction novel that includes artificial intelligence and also has themes of social class and ethnicity.

The novel focuses on a young girl called Nell, it is set in the future where nanotechnology has essentially taken over and affects every aspect of daily life. Although set in the future, it is in the near future, even acknowledging real nanotech researchers’ findings. Nell is given A Young Lady’s Illustrated Primer device that her brother stole. It was designed to allow a young woman to think for herself, and the owner comes after Nell looking to get it back. Both of which are led to a woman whose abilities are designed to reprogram and decode the future of humanity.

The Anubis Gates was written by Tim Powers and published in 1983. It is a science fiction and time travel fantasy novel. It’s one of the most well know Cyberpunk novels.

The novel focuses on Brendan Doyle, a twentieth-century English literature professor who travels back to London in 1810 in order to attend a lecture that was given by the poet Samuel Taylor Coleridge. However, it is not London as we know it, it is filled with deformed clowns, and magic, amongst other things. Brendand is kidnapped by gypsies in 1810, making him miss his return trip back to 1983. He is forced to set up a life in 1810, becoming a con man, escape artist, and a swordsman in order to survive in this new time period against magic, murderers, imprisonment, and even a trip back to 1684. Samuel Taylor Coleridge and Lord Byron both make appearances in the novel as well as a werewolf and other genetic monsters.

Do Androids Dream of Electric Sheep? by Philip K. Dick is a dystopian science fiction novel that was published in 1968 and is set in a post-apocalyptic San Francisco. This book influenced much of the Blade Runner film plot, so if you like Blade Runner, the chance are that you’ll love this book by the incredibly renowned Philip K. Dick.

Set in a post-apocalyptic San Francisco where life on Earth has been damaged by a global nuclear war that has left most species extinct or endangered. The story follows bounty hunter Rick Deckard who has to hunt down and ‘retire’ six androids who have escaped. A secondary plot follows John Isidore who is helping to protect the escaped androids.

Crashcourse is Wilhelmina Baird’s debut novel, published in 1993, it is a cybershock novel that is worthy of attention.

The novel is about Cassandra Blaine, who is a high-tech thief, and her two friends Dosh, a prostitute, and Moke who is a struggling artist. All of whom wish to escape their planet and to start fresh in life. This chance is given to them when they are offered a movie contract, but not all is as it seems. In this reality, signing a movie contract requires you to sign over your life to constant secret surveillance that will eventually be used for movie cuts for the wealthy. The technology involved allows the wealthy to feel the emotions that the characters feel directly. The friends all agree to sign the contract, unsure of when it will start filming and what the movie has in store for them, hoping that they survive the movie long enough in order to earn enough money for escape.

Accelerando by Charles Stross was published in 2005 and is a science fiction novel that is made up of interconnected short stories.

The stories are all set in an era where humans are close to extinction and artificial intelligence has evolved past the level of humanity and the possibility of extraterrestrial life grows more likely with each passing day. The stories focus on the three surviving members of the Macx clan; Manfred, Amber, and Sirhan. Manfred is an entrepreneur who works on amplifying the technology around them, his mind is split between the physical and the internet. Amber is Manfred’s daughter and she is on the run from her mother, seeking money in being an astronaut in the outer system. Sirhan is Amber’s son and soon realises that his destiny is linked to humanity as a whole. The plot focuses on each of the clan’s members and how they survive in a world where humanity is almost extinct.

The Windup Girl by Paolo Bacigalupi, published in 2009, is a science fiction novel that although it is not a classic, will still be sure to impress.

The novel follows Anderson Lake who is AgriGen’s calorie representative in Thailand. He is undercover as a factory manager in search of food that is thought to be extinct. This is where he meets ‘windup girl’ Emiko who was abandoned in the slums. She is what is known as a new person, bred to suit the rich as either slaves, soldiers, and/or toys. The setting of this novel is in a place where oil has run out, calorie companies dominate the world, and bioengineered viruses/plagues are a threat.

The last of our Cyberpunk novels is Ready Player One. This was written by Ernest Cline and published in 2011. It is a science fiction novel that is Ernest Cline’s debut and was soon turned into a Steven Spielberg movie in 2018.

The setting of the novel is in 2044 when the world has run out of oil, the climate is a mess, and famine, poverty, and disease are all a very real threat. The OASIS is a virtual world where you can essentially be anything that you want to be and live the life that you dream of. Most of humanity spends their time hooked into the OASIS in order to escape the reality. Wade Watts is just another person who spends most of his life strapped into the OASIS, obsessed by the possibility of finding the lottery ticket that has been hidden behind riddles scattered throughout the OASIS. The creator of the OASIS dies with no heir, and promised that whoever solves the lottery ticket riddle will control the OASIS and receive his fortune. Wade eventually stumbles across the key to the first riddle and finds himself competing against thousands in a race to claim the OASIS first.

If you enjoyed this article on the best Cyberpunk novels, you might also like to read about these best steampunk novels.