The wizarding world of Harry Potter is a world full of magic and wonder where anything is possible. A place full of adventures, duels, secrets, gross tasting candy, trolls stuck in bathrooms, apparitions, unknown creatures, unresolved puzzles, labyrinths, changing walls, moving pictures, chambers, potions, feathers and of course, magic. The School of Wizardry, Hogwarts, a place where creatures roam free and wizards of all classes connect with their human nature and come together to learn the ways of the wand. This great collection of books written by the talented J.K Rowling made an undeniable impact in the lives of many and left in their hearts the print of magic. Whether you want to be a Slytherin, a Gryffindor, a Hufflepuff or a Ravenclaw, every and any wizard has a place in the glorious universe or Harry Potter. 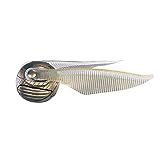 Now to assess the question you’ve all been asking – Yeah, yeah… Harry Potter is surely a wonderful world… but is it Steampunk? And the answer is yes, it absolutely is Steampunk. From the places we see the chronicles take place and develop to the garments they wear and the objects they use on their day to day practice of life and magic. Every little detail in the world of Harry Potter has a connection to the world of Steampunk. They both come together in the realm of fantasy where imagination and wonder unite and become a reality through the most valuable combination of industrial components mixed with Victorian bits and featuring punk.

One palpable example of the Harry Potter Steampunk expression is The Jacobite Train – A picturesque train in Scotland that is better known as The Hogwarts Express! The very same that in the movies is used to transport students from London, King’s Cross Station, Platform 9¾ and Hogsmeade Station directly to and from Hogwarts School of Witchcraft and Wizardry. The industrial railways of The Jacobite Train are a great illustration of Steampunk. It is also a case in point of the ways that steam machinery can be the most exceptionally obvious expression of Steampunk culture.

Another way the worlds of Harry Potter and Steampunk cross is by their endless inspiration on places that existed during the glorious Victorian era. We see the films take place in various versions of castles and cathedrals that resemble the ones where Queen Victoria existed in and shaped herself. The main representative of them all, where they filmed Harry Potter’s films Philosopher’s Stone and The Chamber of Secrets: the iconic Alnwick Castle, located in Northumberland, England. A historically rich castle engorged with raw beauty and silhouettes that connect the Steampunk world with the world of Wizardry once more.

Now we do not only see the correlation of Steampunk in Harry Potter’s filming locations but in their style too. The uniforms, the robes, the monocles, the hats, the boots, the garments, the jewelry… Every piece in all of their glory are all perfect representations of Steampunk fashion in a world where only magic rules. Their professors are stylish characters who adopt Steampunk elements into their looks; Professor of Divination, Sybill Trelawney with her flashy and over the top accessories. Professor of Defense Against the Dark Arts, Gilderoy Lockhart with his mostly Victorian inspired get ups. Professor or Potions, Horace Slughorn with his tight vest and his chains. And don’t even get me started on Quidditch and the coveted Snitch!

Customization can be played with and performed in many different ways. From subtle details like tiny accessories to an entire outfit, the attention to detail is key when styling any sort of ensemble and dressing successfully for your intended occasion. When it comes to Steampunk, every element of a garment has to work together in cohesion with industrial and Victorian inspired components to make it work flawlessly. Like clockwork! But don’t be intimidated by the thought of it all going terribly wrong… here’s some ideas that will help you put together your Harry Potter Steampunk clothes and costume!

For a quick and easy, effortless Harry Potter look, you may add this Harry Potter Adult Robe to your closet. Wearing this, you’ll automatically feel like you’re a wizard. This simple robe will put you in the right track towards fusing the world of Steampunk with the world of magic giving you a base to work with that you can alter and accessorize any way you want! The possibilities with an item like this are endless.

If your creative juices are running low and you cannot think of a way to accessorize your robe, this Golden Snitch will help guide you towards a full Steampunk Harry Potter ensemble. The intricate design of the gold, feathered ball is a focal point that is versatile enough so that you can play it and wear it many different ways. Hold it in your hand for dramatic effect or add it to the top of a hat for a nice little golden touch of Steampunk Potter!

Framed glasses of all kinds are a big contribution to the Victorian inspired Steampunk style. A pair of wizard glasses like the ones The Chosen One proudly sports throughout the movies would complete a Steampunk Potter look, no matter how simple. Add a rounded touch of eye gear to your look to take it to the next level.

No matter what Harry Potter house best represents you and your personality, if you want your style to represent your favorite house or the one you most relate with, adding a tie would be a differentiating touch that will let everyone know who you truly stand for. Ravenclaw, Hufflepuff, Gryffindor or Slythering, add your house colours to your look and earn those points that will put you in the lead!

Possibly the most important part of a Steampunk Potter look is the Magic Wand. The tool that will serve as a vessel to conjure all the spells you’ve learned towards your journeys and lessons in Hogwarts. No wizard is complete without this precious and valuable item, and adding one to your outfit will tie your whole look together.

At the end of the way, when it’s all said and done, after any adventures you embark on, no matter how many trains you take or how many castles you visit… The Wizarding world of Harry Potter is full of magic and full of wonder, and you can choose your path and be the wizard you want to be.

Add a caged Hedwig or dangling potion bottles and change colours from black to brown for a full effect. By adding these Steampunk elements you can fuse both worlds and represent your ideals while you demonstrate and prove your powers at the same time. Welcome to the Steampunk world of Harry Potter!

If you’d like to continue exploring the magical world of different Steampunk clothes and costumes and learn more about it, you may also be interested in: