The Victorian Gothic style has many similarities to Steampunk, hence why the two often collide and form the sub-genre of Gothic Steampunk. The difference between Victorian Gothic and Steampunk, is that Gothic styles tend to be darker and focus on religion and the supernatural, whereas Steampunk focuses more on science-fiction and technology. Typically, gothic fashion consists of dyed hair, dark clothing, and dark makeup such as lipstick and eyeliner. Gothic boots are also a big part of gothic fashion, with most being black in colour, bulky in style, and a lot of them have buckles and accessories such as crosses hanging on them. 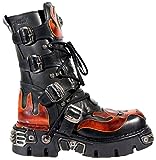 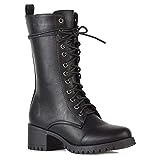 There are various styles of Goth boots, all depending on your preference. For example, there are Dr. Martens that are worn by many celebrities, including Rihanna, Gwen Stefani, Halsey, Robert Pattinson, Orlando Bloom, and Hayley Williams. Dr. Martens come in a range of styles and a range of lengths. They are superior quality and offer both leather, and vegan leather.

Some styles include gothic granny boots, gothic combat boots, and gothic platform boots. Gothic granny boots are platformed heels that are laced all the way up the front in a sort of Victorian style, they come in a range of heights, from ankle to knee-high. Gothic combat boots are what most Dr. Martens styles are classed as. They can have add ons such as buckles or straps, and some contain military style D-rings such as the popular Grenson boots nanette styles, as seen on the likes of Killing Eve star Jodie Comer. The combat style ranges from ankle length to knee-high. Gothic platform boots can be similar to granny boots, but they tend to look more like chunky combat boots with a raised platform, or high heeled boots with a raised platform. A lot of Goth boots contain accessories such as spikes, chains, buckles, and studs that add to the Gothic style.

Men’s Goth boots are stereotypically flatter and in the style of combat boots. They also tend to be either ankle or mid-calf length. Men don’t tend to wear knee-high boots, although it would look badass, just saying. Here are some Gothic style boots for men:

These boots would not just look good on men, they will suit everyone. They are a biker style combat boot, and made from real leather. The addition of buckles and metal plating gives the boots a chunky and Gothic feel to them, but it also presents a sci-fi element to the boots and therefore, they will look great as part of a Steampunk outfit. The detailing on the buckles show skulls which align themselves within the Gothic aesthetic due to the supernatural tags. However, as mentioned, the boots also fit right into the Steampunk aesthetic. The metallic element really creates the image of machinery and a post-apocalyptic world.

These biker boots are of the combat boot style. The many buckles and metal plating are identifying features of Goth boots. The chunky style are also common to Goth boots. The boots contain a flame design that features a demon-like face on the toe of the boot. The presence of the demon is a supernatural detail that links the boots to their Gothic roots. The flames really stand out on these boots and thus they would look great if you are wearing all black with just a tinge of red showing on your boots.

Dr. Martens are a classic boot that are made for everybody. These ones are real leather and simple in style, offering quality and simplicity. The classic style offers a Victorian style combat boot that will look great with any outfit. If you would rather accessorise with the rest of your outfit, then these boots are perfect. Simplicity really works if you don’t want to overcomplicate and clutter your outfit. Simple combat boots are perfect for this scenario.

These knee-high men’s boots are a combat styled boot with added accessories that make them the perfect addition to your outfit. The metal chains and buckles add to the Gothic aesthetic. The knuckle dusters holding the chains in place also add to the Gothic style. These boots have the Steampunk element with the Victorian style of boot underneath the chains. The addition of chains and buckles enters the sub-genre of Gothic Steampunk.

Women’s Gothic boots vary from being flat soled to having platformed high-heels that threaten the loss of your ankles. They also have more length variation than mens boots typically do. They go from ankle boots to knee-high boots, although knee-highs can be a pain to get on, they do look really cool. Here are some Gothic women’s boots to look at:

These boots are mid-calf in length and have a combat style. They are made from synthetic leather, and have a relatively simple style. The boots look Victorian without the addition of buckles from Gothic fashion. They are perfect if you are looking to DIY some boots with studs and spikes, or buckles. However, they look great as they are. They may be simple, but they are effective and elegant.

These boots will not only look great on women, they are a versatile boot that’d look great on anyone. They are raised platform shoes that may take some getting used to if you’re new to the raised platform style. The dark red colour beneath the black netting that drapes over the shoe is a change from the typical black boot. The boot features studs, and some charms such as a spider and pentagram – symbols of the supernatural. These symbols add to the Gothic aesthetic of the shoe, along with the dark colours and chunky sole.

These boots once again contain the Gothic Steampunk element by using a classic Victorian style boot underneath the Gothic elements by the addition of buckles and studs. The combat style biker boots are made of synthetic leather and feature six buckle straps, all containing different styles of studs. The metallic DIY element really creates a post-apocalyptic style, thus adding to the Steampunk style.

These House of Frazer Grenson Nanette boots offer a combat styled boot that are simple in style, looking like Victorian era boots. The boot is less simple than other plain combat boot styles with the use of D-rings and a suede panel that is unique and stands out against the real leather. Grenson offer some other nice boot styles, and they also have the equivalent in men’s boots. If you are looking for a simple style of boot that are still unique, and great quality, then these boots are a great option.